Hi Everyone, In this article, we will talk about Budget Wireless Controller For PS4 and PC. I’ve been gaming on the ps4 pro for a few years now and one of my controllers suddenly is exhibiting analog stick drift, which is the controller would automatically move in a certain direction without us even having our hand on it. I wanted a replacement and not have to payloads for another, so here I have the “RAILAY” wireless PS4 controller. Is it any good, let’s check it out? Here’s the packaging, quite nice a box actually. We have a wireless controller written on top. On the back, we have the features, which is supposed to be equivalent to what the original ps4 controller has. This is a budget controller, which works with a PS4 or even PC’s and mobile phones that have Bluetooth. Two Analog controls, direction pad, touchpad on top, gyro the works. We even have a headset jack for audio.

Vibration motors for feedback are also present. Let’s open up the box. We have the manual, and the controller all wrapped up in this protective foam cover and also a micro USB to USB-a charging cable. Here’s the controller, looks nice. All the standard buttons are available on the controller. The direction pad, the thumbsticks are quite nice. Share and options button on the top next to the touchpad. And the mandatory triangle circle x and square buttons which are depicted in 3d instead of the standard 2d shapes. The ps button has a home icon instead. Audio jack to listen to the game audio on a headset when playing competitively or not wanting to disturb anyone. There’s a grippiness in the handle area of the controller, it feels like rubber but it’s not.

The blue design lines also look cool. Micro- USB port to charge the device, this port is not at the standard location as found on the original controller, so you will not be able to use this device with any charging docks. It does come with a charging cable, but it won’t work with my charging dock. Unlike the ps4’s Dualshock controller with the big led light in the front, this one actually has a small one above the home button. Buttons on the back are the L1, R1 and L2 R2The thumbsticks are also buttons so the two of them are L3 and R3. PS4’s games also use the touchpad for controls in-game, and it’s available on this controller. 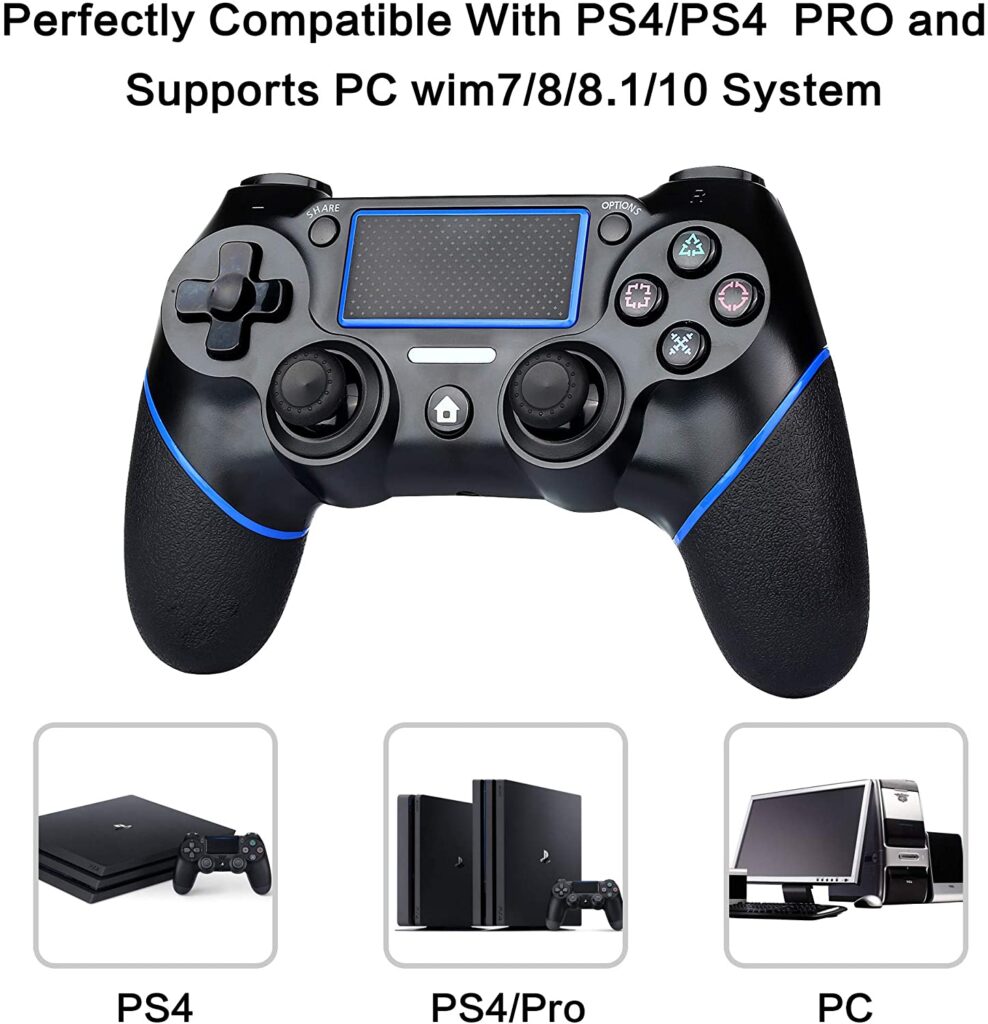 This controller can be used with a PC via Bluetooth, so let’s do that first. I have a tp-link Bluetooth dongle on my desktop, if you’ve not seen the review here’s a card. Hold down the home and share buttons for a few seconds to activate pairing mode. And find the device on the pc, and easy as that we have the controller paired. This controller being a Dualshock 4 clone, would need the ds4windows application to enable using it in all the games. The feel is good, buttons feel ok, let’s see if all the functions are working properly. Witcher 3, looks like it’s working. The touch bar also allows us to pan around, cool. The sensitivity seems to be a bit too much, a small tweak and it’s working well. Final Fantasy XIV works well here too. Dirt 3, the controls are granular, as is visible in the accelerator controls. If you don’t have Bluetooth on your PC, you can use this as a wired controller too via the micro-USB cable. Now, to set it up to the PS4, just plug in the chagrin cable between the controller and the ps4. Press the home button and the ps4 turns on, and the controller is set up for wireless use. That’s it, how cool is that.

The gameplay, the controller does seem to work well, with the occasional niggles but overall is responsive. Here’s spiderman, works well, but I noticed the controls are bad on the original Dualshock 4 too, so won’t blame this one too much. Gravity rush, we have motion controls here, and you can see the whole interface bob and turn as per the controller. This is using the gyro sensor within. So final thoughts, The controller is fine. The buttons are a bit too soft compared to the original dualshock4’s, some people might actually like it. The settings are tweakable on the PC for sensitivity, but on the PS4 there were a few mis-presses, not sure if it was the game or the controller as the original controller itself is not as responsive in spiderman.

The L1 and R1 buttons are granular in control, which is great in racing games as you can control the acceleration by just releasing the button slightly which is not the case on a keyboard which is press key – 100% and leave – 0%. The controller gives you actual granular control which is so much better. The build is fine and the battery also lasted similar to the other Dualshock 4 controllers. The micro-USB port is in a different location makes it incompatible with charging docks which is a bummer. If you can get Dualshock 4 controller under $49 then go for that instead, else if you are looking for a kind of budget option, this is fine.

So this concludes the topic for Budget Wireless Controller For PS4 and PC. That’s about it for me, I forgot to tell you something, If you’re enjoying this article, please make sure to share the article. If you have any questions, comment down below, and I’ll try my best to answer them.