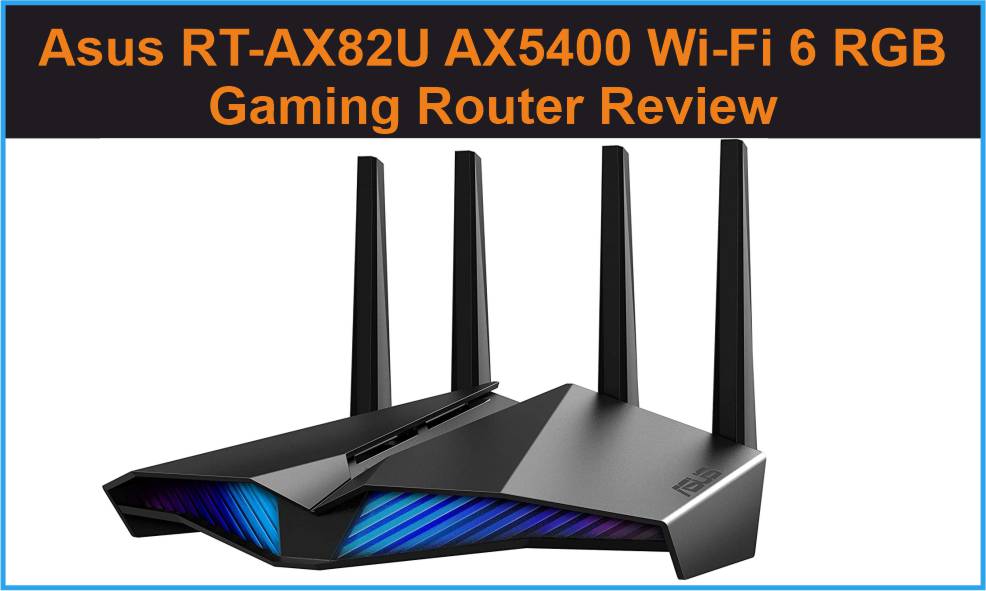 Is this a plane, is this an insect, or is this… an expensive Wi-Fi 6 router that you don’t really need? Well, we are going to check that out today, hey guys, I am Rihan, and let’s get started. When I looked at the images of RT AX82U, it looked kind of cheap and reminded me of the budget Tenda routers, but I have to say that it looks pretty cool in person, and the plastic that the body is made of also feels high quality.

It looks like a space ship from a science fiction movie, but the child inside me really doesn’t mind that, the RGB implementation of this router is also really awesome, and the diffused front covered by its angular body gives this router a very unique look, which I really like. You can customize the lighting with different effects, but it doesn’t have the ability to indicate different statuses or connectivity issues like Asus’s other more generously RGB-ed routers.

The 4 antennas here are not removable, but you don’t really need to do that and it has a triple-core processor inside, along with 512 MB RAM, which it requires because of the features I’ll explain in this article. At the back, you have 4 gigabit LAN ports, along with a Gigabit WAN Port, also, of course, have the WPS, power, and reset buttons, and the USB port here is a USB 3.2 Gen 1, which is pretty cool to have. The router also supports WAN Aggregation so you can use the LAN 4 port as an additional WAN port to take your total WAN to speed up to2 Gbps.

You also have a button on the top of the router which is only there to control the Aura RGB (and LED). Asus has also taken care of the function, in addition, to form, as the bottom of the router also lifts its body up a bit to allow for air to pass through its bottom where we have a large heatsink, and the router stays really cool, which is something that you would start appreciating once you try other high-performance routers.

The RT AX82U of course has MU-MIMO (text: I think it’s 2×2) and beamforming, and with Wi-Fi 6, it offers features like OFDMA and client scheduling, so if you have a lot of devices connected to your router, you are going to get a better experience, and in places where you have lots of other networks, WiFi 6 is also going to help a lot. For online gaming, you’re also going to get a smoother experience, and even on wired mode, this router has a ‘gaming port’ that could reduce the latency in games to some extent.

The interface for controlling the router looks a little outdated for how modern this router is, but it’s very stable, and easy to use and offers tons of features. Most of the functions of the desktop browser interface are also accessible using the very nice app that Asus has. In addition to a normal router functionality, you can also set this as a media bridge, as a range extender, and it also of course has Ai Mesh functionality, which can let you connect any Ai Mesh supporting router to this and create a mesh network.

Then there’s the Antivirus feature which also lets you control access to different categories of content that may not be suitable for children, and you can even select specific devices connected to the router that has restricted access, You also have a firewall in addition to the AI Protection which even allows you to block specific URLs and keywords. Quality of service allows you to prioritize different kinds of workload and control the bandwidth of different devices, and then there’s a traffic analyzer that lays out the traffic usage of all of your devices in a really nice way.

This is a gaming router, so you of course have features to prioritize and optimize the gaming experience, and it even optimizes the traffic for mobile devices. OpenNAT allows you to create port forwarding rules and optimizes your gaming experience, and you can even control this router with an Alexa device so you can prioritize or control traffic with different voice commands. For VPN, the router supports OpenVPN, PPTP VPN, and IP Sec VPN. With the USB port, you can of course add pen drives and hard disks to turn it into a media server or NAS, but there’s also a very special feature on this router which allows you to download files or even torrents from the internet directly to a USB storage device.

The router can download torrents directly to a pen drive without needing a computer, just think about how amazing that is. You can also enable Ai Cloud service and access files stored on a connected USB device, or a connected network PC from anywhere in the world. The transfer speed on the USB port is also very good as I was able to get around 100 Megabytes per second with a wired connection, so the only bottleneck seems to be the gigabit LAN port here, and even my Wi-Fi 5 PC was able to download files at 70 megabytes per second over a wireless network in another room with a wall in between which is again very good.

So now let’s talk about the performance of this router, and it is unsurprisingly really great. On its 5 GHz network with my ROG Phone 3 which supports Wi-Fi 6, I was about to get 881 Mbps in the best case scenario with my phone 1inch away from the router, then in the room next to it with one brick wall in between, I got 830 Mbps which is still really amazing, then in another room further away with multiple walls in between, I got 487 Mbps, and I was even able to get network in my second flat where I was able to get 103 Mbps, and these speeds are really impressive.

The maximum speed here is close to my cheaperTP Link AX50, but the RT AX82U is really much faster when it comes to the speeds I get in my rooms further away. The 2.4 GHz network on this router also supports WI-FI 6, so it also gave me 219mbps in the best-case scenario, with my other room getting186 Mbps, and my company office getting 129 Mbps. Even with the greater range of the 2.4 GHz networks, I didn’t get better speeds than the 5 GHz band in my other flat.

Coming to the range of this router, it is really a step up above the lower end Wi-Fi 6 routers, and I was able to get almost complete coverage in both of my flats, even on its 5 GHz band, which is really amazing. It’s not that big of a jump over something like a TP-Link AX50, but it does provide a more stable connection over a longer distance, which is very important. So overall, the Asus RT AX82U is definitely a very well-performing router with plenty of features, but is it worth its 22,000 Rs.or 230 USD price tag? For that, I will compare it with the TP LinkArcher AX50 which costs around 7500 Rs. or 100 US Dollars, and the Archer AX50 can actually provide speeds that are close to the RT-AX82U, but the Asus router provides higher speeds over longer distances.

I recently upgraded to an 800 Mbps connection, and the AX82U is able to deliver around 750 Mbps in the room where my PC is, while the AX50 delivers around 500 Mbps, and that is a really big difference on the actual internet speed. There’s also no way to make the AX50 work as an extender or use it in Mesh mode, the speed on its USB port is quite slower in comparison, it doesn’t have any special gaming features, the app and software features aren’t as good, you can’t do things like Ai Cloud storage or download torrents on a pen drive, and the AX50 also overheats a lot for some reason.

But the point is that this is more expensive than the budget Wi-Fi 6 routers, but it does have features and performance that I think make it worth its price. If you don’t need these features and performance, the budget Wi-Fi 6 routers will do fine, but if you have a lot of devices, and high-speed internet, the RT AX82U is going to give you much better performance in addition to much better control over these devices with some nice monitoring tools, and we have already discussed how women are really into men who have RGB routers at their homes.

So this concludes the topic for Asus RT-AX82U AX5400 Wi-Fi 6 RGB Gaming Router Review. That’s about it for me, I forgot to tell you something, If you’re enjoying this article, please make sure to share the article. If you have any questions, comment down below, and I’ll try my best to answer them.