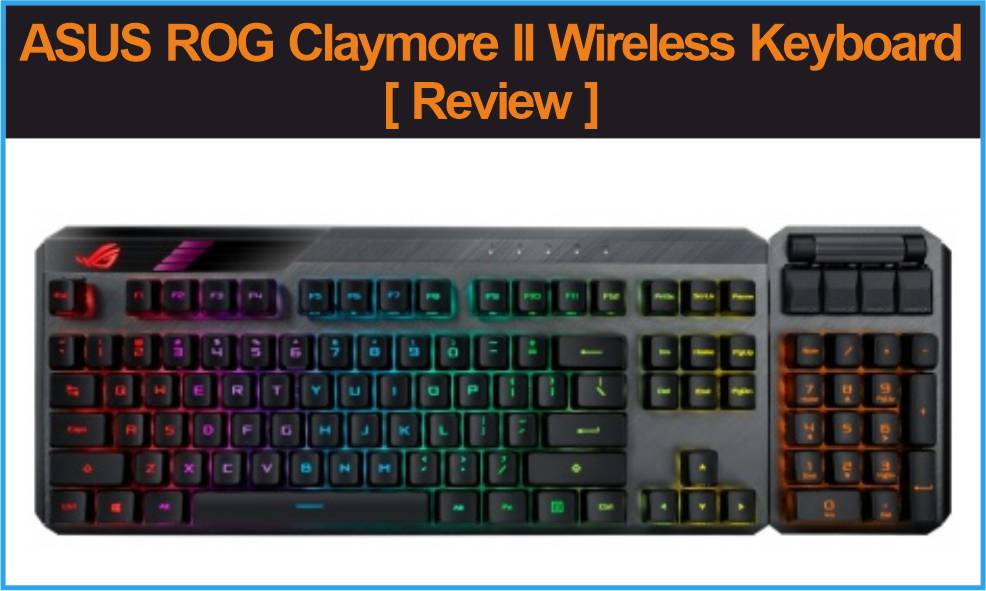 I actually wouldn’t be surprised if this was the way the industry is heading. This is the ASUS ROG Claymore II Wireless Keyboard. “It’s from Asus, for me to unbox it for you people, to show the world what’s inside this box. Apparently, it’s a wireless optical-mechanical gaming keyboard. Whoa. Okay. The first thing I see, there are two sections to this box. This appears to be a shortened like 10 keyless. Yes. Keyboard. And this? Is it a mouse? No, it’s the num pad and it doesn’t look like it has any way to attach to this keyboard, but it does. I’ll try that in a second. First, let’s look at what else is in the box. Oh no, it’s a bunch of stickers. Cool. Some literature. Okay. Then there is a wrist rest. It’s kind of embossed on this side with the ROD logo. And that is how cushy it is. This is the charging cable.It is USB C to shining C. Okay. There’s a couple of little doohickeys in the box. This one is a USB A to C adapter, so the C to C cable is going to go into your PC and you don’t have a spare USB C port, plug that into your spare USB A port. And the other one is an extender, so if you are finding that you’re getting intermittent issues with connectivity, if your peripherals are glitching, it’s nice to be able to pull your dongle out and off your PC tower and somewhere closer. I actually have mine behind my monitor and I have no issues then. Look at that, it’s magnetic. First of all, it’s nice that it just has it at all. I’ll accept just like a piece of tape on the back. Like anything, any place for this to live I appreciate, but this is one of the nicest I’ve seen. So it’s a wireless keyboard that is 10 keyless, or not, and you can actually put this num pad on either side. This. So it is on a track, stays on there. Is this magnetic? It is. This looks like your standard 104 key and num pad and I’m ready to type kind of thing. Or you can put it on this side and then this is your kind of gamer layout.

So, you have more mouse room and less fatigue when you’re stretching your arm way over there. So that’s cool. One setting for the feet. Ah, look at this. Even this guy has a bigfoot. And each of the feet has little rubber sub feet. This is stiff. The build quality, this is pretty stiff. I like that. It looks like it has an aluminum front plate, glossy plastic back. And then as you can see, it has a USB pass-through. So you can plug in your USB C cable for pass-through where you can also plug-in like your headphones or whatever, or you can switch, instead of pass-through, you hit F, you hit function F12, and it switches to fast charging mode. So this is wireless. Okay. That’s the full setup. Obviously, I can move this to whatever side I want or I do not use it at all, but now that it’s set up, let’s touch it. The whole reason this thing exists is that it is an optical keyboard, and you can see they even have their own STEM design but more on that in a second. First I kind of just want to touch it. Yeah and this is definitely giving me a faster activation than I’m used to with less activation force than I’m used to. I am used to using clicky switches and you can get this keyboard with blue clicky switches or linear ones like they have on here. These are the kind of red type. They recommend you use this for a few days even before you do an unboxing like I am right now, but I can see why because they don’t want you to write it off because you’re getting misclicks. After all, they’re more sensitive than you’re used to. I don’t think I would be less accurate off the bat, but at the same time, I can feel that I think I might be faster with this eventually. There’s just something about it that makes you wanna type faster.

Okay, so optical switches are sweet, mostly because they’re going to last longer. They’re going to be consistent. And even though a normal mechanical switch will last for 50 million presses, these will last longer because, believe it or not, you can hit a switch 50 million times in actually just a matter of months, especially if you’re talking about your WASD or your arrow keys or something like a spacebar. So reliability is good because there are just fewer moving parts. There’s just, you’re hitting the switch down and it’s interrupting a laser beam. And so that means that there’s no history resets (?) or like reset when you’re when you D bounce off of that switch it’s going to actuate faster and more consistently. So that’s why I kind of, I wouldn’t be surprised if the opticals kind of takeover over time. Oh, and by the way, Asus wants you to know that when the switch was first announced a lot of people compared it to the Romer-G’s from Logitech, which Asus respects but these are completely different with a quite different design, they say. There you go. This switch, you can tell from the STEM it’s different, it’s kind of like a box design, totally open in the middle. So once I get this turned on you’re going to see a lot of RGP shining through that, I’m sure. It seems like a flashlight is coming through there. And then you can see they have these four corner latches to give it more stability. I’ve wobbled a lot of key switches and that’s pretty minimal actually. You can see the key switch design has these four posts. It’s a little different. With these reds, it takes an initial force of 40 grams to go one and a half millimeters before it actuates. And then at 55 grams for the whole, the whole stroke to deep bounce back up. (typing sounds) I don’t think you’re going to have too many accidental strokes on these.

I’m just unreal at typing. I did have a couple of miss-strikes where, you know, you get used to a certain tolerance level where like, well my fingers can just flail around the board, it’s fine. But on this, you might have to be a little more disciplined. I think I’d get used to this pretty quickly. There’s like little indicator lights up in here. Let’s go function. Yeah. Okay. A single white LED for windows lock. Sure. There’s your caps lock. Let’s talk about this little keypad for a bit. On the one hand, you might be like, oh cool, there’s like super tactile macro keys here, listen to this click. But on the other hand, you might think, well it kind of sucks that my macro keys are way over there. Maybe you want them closer on your board. Well, you’re in luck because on this board almost every single key can record a macro and it’s really easy to do. I believe you just go function alt and then you record whatever macro you want it to be, or key, and then you hit function alt again. And then I think you have to assign the key to it. Let’s say one. Whoa, it worked. You can see on the alt button it says macro. So alt one, there you go. QWERTY. Nice. What I do like about the keypad on the side is that it is symmetrical. So whether you have it on the left or right it doesn’t really matter because the macro keys are on the top, not on the side of it. You imagine if those macro keys were on the left, when it’s over here they’re not at the end of the keyboard, or when it’s over here, they are. That would suck. For other lights, you’ve got the breathing ROG logo, and then there’s actually a battery indicator light up here. Only two are illuminated right now but there are actually four bars and they light up according to how much battery you have left. It’ll look different if you’re full and it’ll actually be blinking red if you have less than 25%. So this puppy actually has a 4,000 millionth hour power battery inside, which of course is rechargeable by USB type C.

And then they say that you can get 144 hours out of it with the lights off and 43 hours with the lights on and blasting 100%. You get 61 hours if you have it at 50% brightness. And because it’s USB type C fast charging, 30 minutes of charge gets you eight hours with the lights on and 18 hours with the lights off in 30 minutes. That’s pretty dang good. You can pretty much be set for the weekend just by half an hour of charge. All right. So you saw me record macros for the normal keys. You didn’t see me record a macro for these. And that’s because to do that you actually have to use the armory create software which looks like a pretty robust software. This is what’s used for more than just this keyboard, it’s used for lots of ROG products. You can auto-sync all your different RGV peripherals together. And I guess some PC parts as well, but you can see, you can click on individual keys and change their functions. And then these are my macro keys up here. So that’s the key tab. Then there’s the RGB indicator tab. Oh, cool. So what I thought was the battery indicator doesn’t actually have to be the battery indicator. You can make it just breathe with the rest of the RGB. Then you’ve got all these effects for RGB. Man, you could spend a lot of time here. And this is really clean-looking software. Then on the power tab, it tells you your current battery life. You can set when you get an alert, you can actually choose when it goes to sleep mode after being idle. This is the RG Claymore 2 keyboard. I would love to try this with their clicky optical keys, which I don’t have.

So this concludes the topic for ASUS ROG Claymore II Wireless Keyboard. That’s about it for me, I forgot to tell you something, If you’re enjoying this article, please make sure to share the article. If you have any questions, comment down below, and I’ll try my best to answer them.