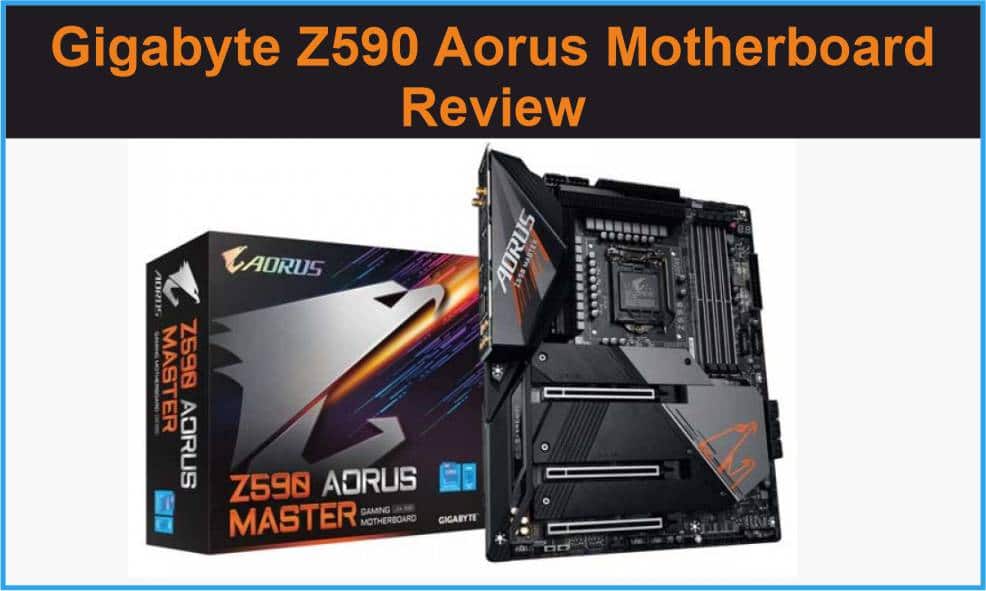 Gigabyte Z590 Aorus Master Review: After staying silent for some time Intel finally announced its new lineup to compete with AMD processors. It’s the Rocketlake S platform that embodies a new architecture and features on a 14 nm node.

As it has always been with Intel, along with new processors comes a new lineup of the chipset. So the new processors are being launched with a 500 series chipset support Among which the Z590 chipset will be its flagship chipset.

which arrives with new connectivity and I/O improvements. Some of which are double bandwidth links between the CPU and the chipset Increased native memory frequency support.

i.e. for a speed of 3200 MHz instead of 2933 Mhz And finally a proper PCIe Gen 4 support. Well! Intel took a lot of time in implementing these changes but hell, they are finally here.

So let’s talk about today’s topic I know I took a lot of time in the introduction but it’s worth the wait we are talking about the Gigabyte Z590 Aorus Master. which is a high-end Z590 board. It’s not the flagship model in this lineup but still, it has all those features you expect from a high-end board. So let’s start with the form factor.

It’s a standard size ATX board covered with large metal heat-syncs both on the front and the back and also has a backplate. This backplate contacts the VRM so it also adds to the cooling, As usual, there are RGB elements around the board but its black PCB design gives it a nice clean look. 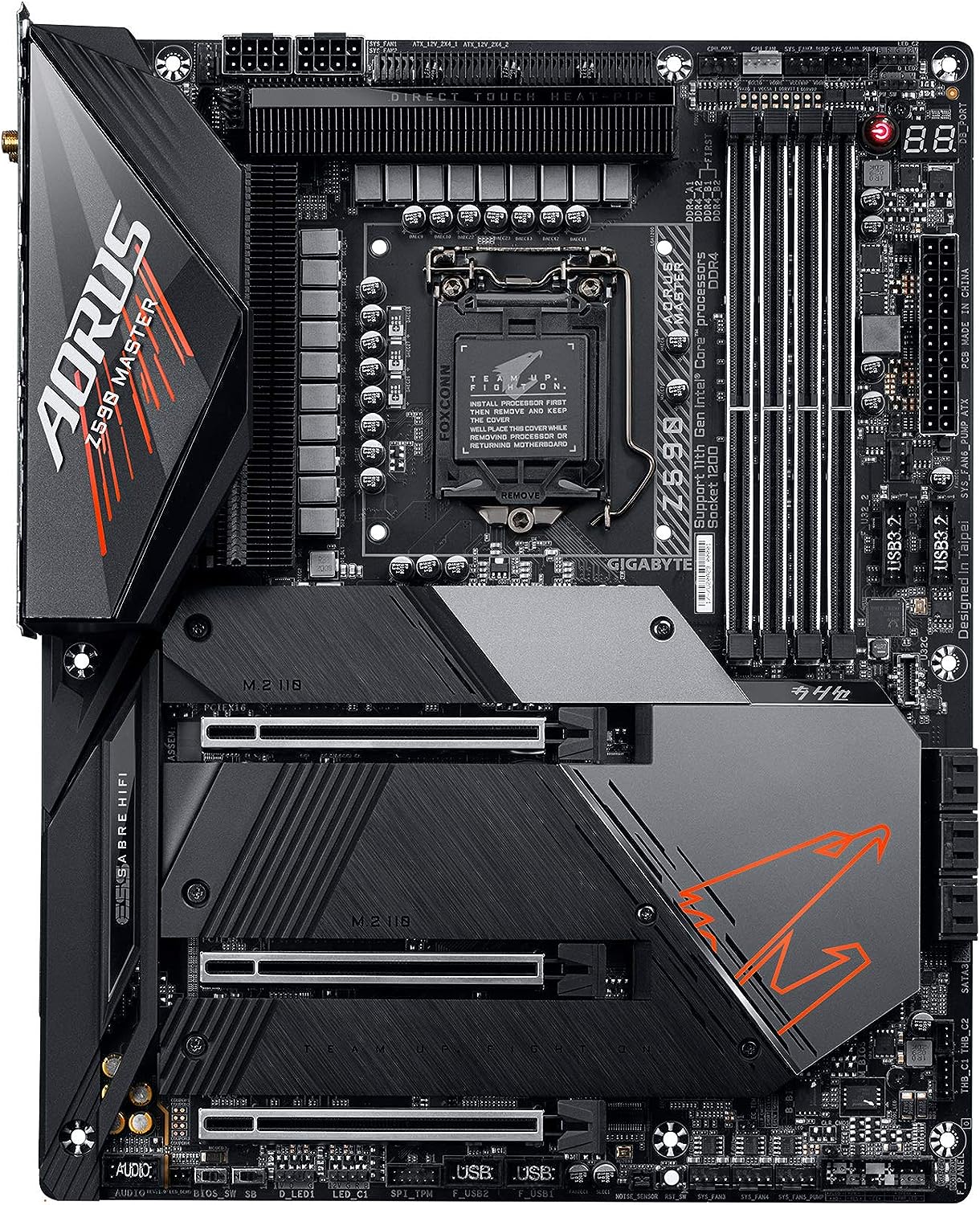 And I like it! The Main VRM heat-sync are finned which means increased cooling surface area. Anyways it does not need that much cooling as its VRM setup is already very capable but we will talk about that later.

So we get 4 RAM slots as usual and the socket area seems packed but hopefully, you won’t face any such problem while installing the air cooler. Below the socket, under a single-piece heat-sync, we get 3 X M.2 slots!! And 3 X full-size PCIe slots.

And finally, these slots support PCIe Gen 4 speed. Intel is late to the party but at least they’re here! Only one of these slots(M.2) supports Gen 4speeds, unlike AMD’s X570 chipset.

so that will be a point of consideration I think motherboard audio is a very important element when it comes to buying a motherboard. And Gigabyte has implemented a high-end solution here It has ESS Sabre’s 9118 DAC which is very famous for its warm sound signature.

Along with ALC1220 for codec support and impedance detection and Mic support etc. Unfortunately, I won’t be able to test it as I don’t have a compatible processor.

But going by the previous implementation it should be good. Talking about other connectors, we get 10 X 4 pin fan headers 4 X RGB headers 2X USB 3.2 headers1X USB – C type 6 X SATA ports. This motherboard comes with dual BIOS support so in case an OC setting or a bios update fails You can always get it running again.

For that, you get these switches here to switch between BIOS options. We also get some convenient features here such as a power button, postcode display, and a reset key which you can customize through the BIOS. You can change RGB it, directly switch to safe mode, and much more.

It will be very convenient in case you wish to tweak with the BIOS and the settings fail. Now let’s discuss the VRM setup in detail You get an 18 + 1 phase VRM setup which is actually a doubled up VRM setup. Where 18 phases are for CPU and 1 for the GPU.

These 18X Intersil ISL99390 (90 Amps) chips are controlled by the ISL69269 PWM controller. And for filtering, it has a tantalum capacitor about which I didn’t know much. So I did some research.

The main benefits of Tantalum capacitors compared to traditional ones are Better capacitance, longer life span, and overall better quality and sustainability(putting it simply these are better than traditional ones!!).

For VRM cooling this board comes with finned heat-syncs which are connected to each other through a heat pipe. Overall this VRM setup is ready for any OC but still don’t know how the 11th gen processors will overclock. Because from what we heard, they are going to be power-hungry!

Let’s talk about the I/O area which as you can see is feature-packed. Here you get a Q-flash button, a Clear CMOS button, 2 WiFi antenna Which supports the WiFi 6 and is handled by an Intel AX210 chip 1 Display Port and 1 USB 3.2 type – C portGen2X2 which means a bandwidth of 20 Gbps.

You don’t get any USB 2 ports here. Besides that, you get 5 X USB3.2 Gen 2 port 4X USB 3.2 Gen 1 ports. So in terms of USB, this board is completely packed as usual with Gigabyte boards For the LAN connectivity, you get an AquantiaAQC107 10Gbps LAN connector.

And really liked the fact that they did not implement 2 LAN connectors. One is a 2.5 and the latter is a 10 Gbps port But a single 10 Gbps connector is always better. At last, we get the full surround audio connectors which are connected to the ALC1220 codec.

So as we mentioned at the beginning that this won’t be a review of the motherboard because unfortunately we don’t have any 10th gen processors and the 11th gen has not been released yet. They are launching very soon, I mean Justin few days But reviewing this board without a processor is impossible.

So we will surely try to get the 11th gen processor for testing and I am very excited about that. Let me tell you one thing that this board is not for the average user. It’s a very high-end board.

This board is for those who are completely aware of what features they want and how to actually utilize them. You get almost everything for the price you pay. And I think if you are considering going for the Intel platform with something like a 11900K then this can be a good option for you if your wallet allows.

So I would like to thank Gigabyte for sending this board to us and I wish they would have also sent us the processor along with the board Anyways I will wait for that.

So this concludes the topic for Gigabyte Z590 Aorus Master Review. That’s about it for me, I forgot to tell you something, If you’re enjoying this article, please make sure to share the article. If you have any questions, comment down below, and I’ll try my best to answer them.